Buddhism is a major global religion with a complex history and system of beliefs. The following is intended only to introduce Buddhism's history and fundamental tenets, and by no means covers the religion exhaustively.

Historians estimate that the founder of Buddhism, Siddhartha Gautama, lived from 566(?) to 480(?) B.C. The son of an Indian warrior-king, Gautama led an extravagant life through early adulthood, reveling in the privileges of his social caste. But when he bored of the indulgences of royal life, Gautama wandered into the world in search of understanding. After encountering an old man, an ill man, a corpse and an ascetic, Gautama was convinced that suffering lay at the end of all existence. He renounced his princely title and became a monk, depriving himself of worldly possessions in the hope of comprehending the truth of the world around him. The culmination of his search came while meditating beneath a tree, where he finally understood how to be free from suffering, and ultimately, to achieve salvation. Following this epiphany, Gautama was known as the Buddha, meaning the "Enlightened One." The Buddha spent the remainder of his life journeying about India, teaching others what he had come to understand.

The Four Noble Truths are a contingency plan for dealing with the suffering humanity faces -- suffering of a physical kind, or of a mental nature. The First Truth identifies the presence of suffering. The Second Truth, on the other hand, seeks to determine the cause of suffering. In Buddhism, desire and ignorance lie at the root of suffering. By desire, Buddhists refer to craving pleasure, material goods, and immortality, all of which are wants that can never be satisfied. As a result, desiring them can only bring suffering. Ignorance, in comparison, relates to not seeing the world as it actually is. Without the capacity for mental concentration and insight, Buddhism explains, one's mind is left undeveloped, unable to grasp the true nature of things. Vices, such as greed, envy, hatred and anger, derive from this ignorance.

The Third Noble Truth, the truth of the end of suffering, has dual meaning, suggesting either the end of suffering in this life, on earth, or in the spiritual life, through achieving Nirvana. When one has achieved Nirvana, which is a transcendent state free from suffering and our worldly cycle of birth and rebirth, spiritual enlightenment has been reached. The Fourth Noble truth charts the method for attaining the end of suffering, known to Buddhists as the Noble Eightfold Path. The steps of the Noble Eightfold Path are Right Understanding, Right Thought, Right Speech, Right Action, Right Livelihood, Right Effort, Right Mindfulness and Right Concentration. Moreover, there are three themes into which the Path is divided: good moral conduct (Understanding, Thought, Speech); meditation and mental development (Action, Livelihood, Effort), and wisdom or insight (Mindfulness and Concentration).

Contrary to what is accepted in contemporary society, the Buddhist interpretation of karma does not refer to preordained fate. Karma refers to good or bad actions a person takes during her lifetime. Good actions, which involve either the absence of bad actions, or actual positive acts, such as generosity, righteousness, and meditation, bring about happiness in the long run. Bad actions, such as lying, stealing or killing, bring about unhappiness in the long run. The weight that actions carry is determined by five conditions: frequent, repetitive action; determined, intentional action; action performed without regret; action against extraordinary persons; and action toward those who have helped one in the past. Finally, there is also neutral karma, which derives from acts such as breathing, eating or sleeping. Neutral karma has no benefits or costs.

The Cycle of Rebirth

The realm of man also offers one other aspect lacking in the other five planes, an opportunity to achieve enlightenment, or Nirvana. Given the sheer number of living things, to be born human is to Buddhists a precious chance at spiritual bliss, a rarity that one should not forsake. 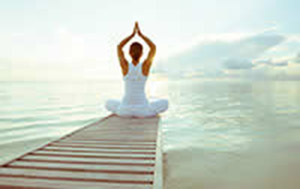 The basic Buddhist code of ethics, undertaken by lay followers

The wise having clearly understood this,
delight in awareness
and find joy in the knowledge of the noble ones.
These wise ones, meditative, persevering,
always using strong effort,
attain nirvana, the supreme peace and happiness.

If a person is awake, aware, mindful, pure, considerate,
self-restrained, and lives according to duty,
that person’s glory will increase.
By awakening, by awareness, by restraint and control,
the wise may make for oneself
an island which no flood can overwhelm.

Whoever meditates with awareness obtains great joy.
When the wise conquer thoughtlessness by awareness,
climbing the terraced heights of wisdom,
free from sadness viewing the sad crowd below,
they gaze upon the fools, like one on the mountain peak
gazes upon those standing on the plain.

Aware among the thoughtless, awake among the sleepy,
the wise advances, like a racehorse leaves behind the slow.
By awareness Indra rose to become chief of the gods.
People praise awareness; thoughtlessness is always blamed.

Thank you for your support!

Khmer Buddhist Temple of Ontario would like to thank all devotees, who volunteered to help in events, make improvements, and especially thank you very much to all donors who donated money to support our temple. May you all attain peace and happiness in life. Many blessings!!